This shop has been compensated by Collective Bias, Inc. and its advertiser. All opinions are mine alone. This content is intended for readers who are 21 and over. #BigGameAdvantEdgeÂ #CollectiveBias

We’re gearing up for the big game, and for some people, football conversation starters are needed! Great food, drinks and conversation are what football parties are all about. So, what are some easy conversation starters for novice football fans? I’m going to help you with that, as well as share an easy skillet nacho pizza recipe and a new delicious drink to get things rolling. What topics and football conversation starters are easy enough for the novice, yet intelligent enough so you don’t sound like you’re trying too hard? Here are a few you can use…

1. How do you feel about the rule of reviewing every touchdown?

ThisÂ new-ish rule on the football field has the refs reviewing every touchdown made in the game. This makes sure the call on the field was accurate and a touchdown was scored. If a touchdown was not made, the ball would be placed where it should have been called down, and play would continue as usual.

The controversy: Why review every touchdown? Football has been played for a very, very long time without cameras, let alone replay and reviewÂ rulings. Errors happen and it’s part of any game. Eliminating mistakes isn’t always a good thing. Automatic reviewÂ changes the game, changes the momentum on the field and changes the mentality of the players playing the game. (ie. you no longer need to overcome a mistake and fight harder for the win.)

What if? What if a mistake is made during the review of the touchdown? What if a touchdown was scored, but the referees failed to confirm the touchdown and placed the ball at the 1 yard line? This could change the outcome of the game as well.

2. What happens if the game ends in a tie?Â

A tie in a football gameÂ happens from time to time, especially when you have two teams which are nearly equally skilled. This is what happens when you get to the big game, the two best teams from each division play in the championship game to see who emerges as the winner.

If you’d like to know the answer, read on!Â The rules in the league are constantly changing, and even the overtime rules have changed. As of right now, the rules are as follows.

When end of regulation play results in a tie, a 15 minute modified sudden death overtime period will be played. A coin flip will determine who kicks off and who receives the ball for the opening drive. During the opening drive, if the team with the ball scores a touchdown, they win the game. This is different from previous rules, where the team would only need to score a field goal to win the game.

If the game is still tied after both teams have had their first drive, a true sudden death overtime plays on. The first team to score wins, this includes a safety, touchdown orÂ field goal.

Each team has three time outs per 15 minute overtime extra quarter. In the postseason, a game cannot end in a tie, so there will be as many 15 minute extra quarters played as needed until a winner emerges.

If you’re a novice, and are only at the football party for the food and drinks, this is the question for you to ask!Â There’s no right or wrong answer, so everyone can chat amongst themselves. For those not really interested in who everyone’s favorite players are, this can seem like a long and boring conversation – so it’s snack and drink time! It’s time to chow down!

Speaking of chowing down, let’s get on to that skillet pizza nachos recipe! To make this recipe, you’ll need a few basic ingredients. Find a printed recipe below. Drizzle olive oil over the chips and spread the oil around with a brush. Add a severalÂ tablespoons ofÂ TOSTITOSÂ® Mild Salsa. Next, add cheese over top of the chips. Add another layer of chips and repeat until you have a few layers of deliciousness! I can usually get two or three layers in my skillet. Don’t overfill the skillet or you risk it spilling over into your oven.

Bake in 375Â°Â preheatedÂ oven for 13-17 minutes or until cheese is melted.

Caution: skillet will be hot! ItÂ stays hot for a long time after it comes out of the oven. Set it on a proper surface or risk burning your table or melting your table cloth! 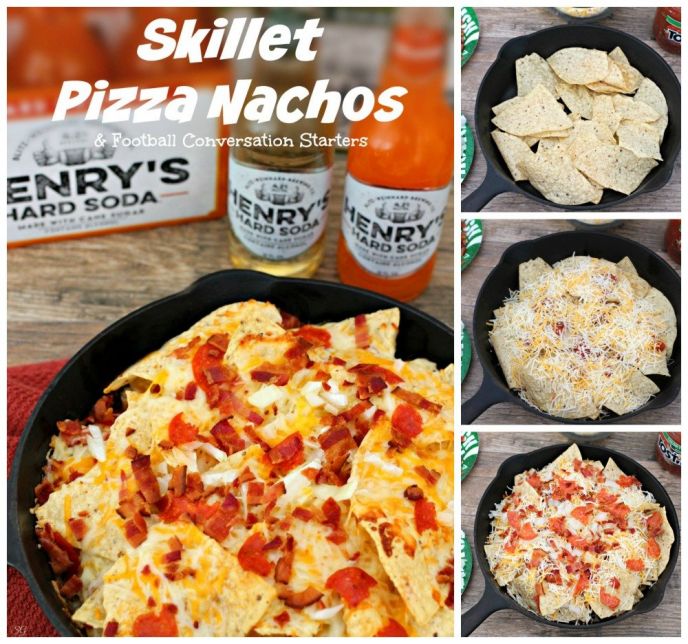 I know the first thing I do when I feel out of place is loosen up a little bit. So, for those people who feel a bit out of place at my party — perhaps because they’re not enthusiasticÂ football fans — I’m going to have some of the new Henry’s Hard Soda on hand. Have you heard of Henry’s Hard Soda? It’s brand new and just hitting stores! Unlike other hard sodas, Henry’s has 4.2% alcohol, making it more enjoyable, and I think more nostalgic! Henry’s Hard Soda isÂ available in orange and ginger ale flavors, so naturally I’m serving both at my football party. Not only will this bring back nostalgic flavors for those of us who grew up on soda – it does it with a greatÂ adultÂ twist. If you feel like you’re going to need more food than thisÂ pizza nachos appetizer, I’d suggest stopping by Price Chopper and snagging the wing and pizza deal! While you’re picking up your TOSTITOSÂ® chips, salsa, ingredients, and your Henry’s Hard Soda, you need to grab theÂ pizza and wings deal. ForÂ $22.99 youÂ canÂ getÂ twoÂ single Topping pizzas and 2lb. of wings! This deal will round out your party for sure!

What are you serving for the big game?

Because I enjoyed the ease of gettingÂ MillerCoors products at Price Chopper for our football party, I also wanted to give a shout out to my favorite local bars where I get MillerCoors brand drinks. Ziggy’s Pizza & Sports BarÂ in West Lebanon, Salt Hill Pub in Lebanon and The Canoe Club in Hanover, NH, thanks for always giving us great places to go to enjoy the game and great company when we’re not entertaining at home!