Shepherd’s pie is on the menu tonight! How are you celebrating St. Patrick’s day? This meal will hit the spot and give you a taste of Irish tradition.

When we think St. Patrick’s day we often think about beer, cupcakes, or other treats. But when we get down to it, we all want a hearty meal to satisfy our Irish hunger that burns inside.

That’s why we’re making a delicious Shepherd’s pie today. Loaded with beef and potatoes, just the way you remember it.

Today we’ll discover how to make Shepherd’s pie, also known as cottage pie, who invented it, and where it originated. 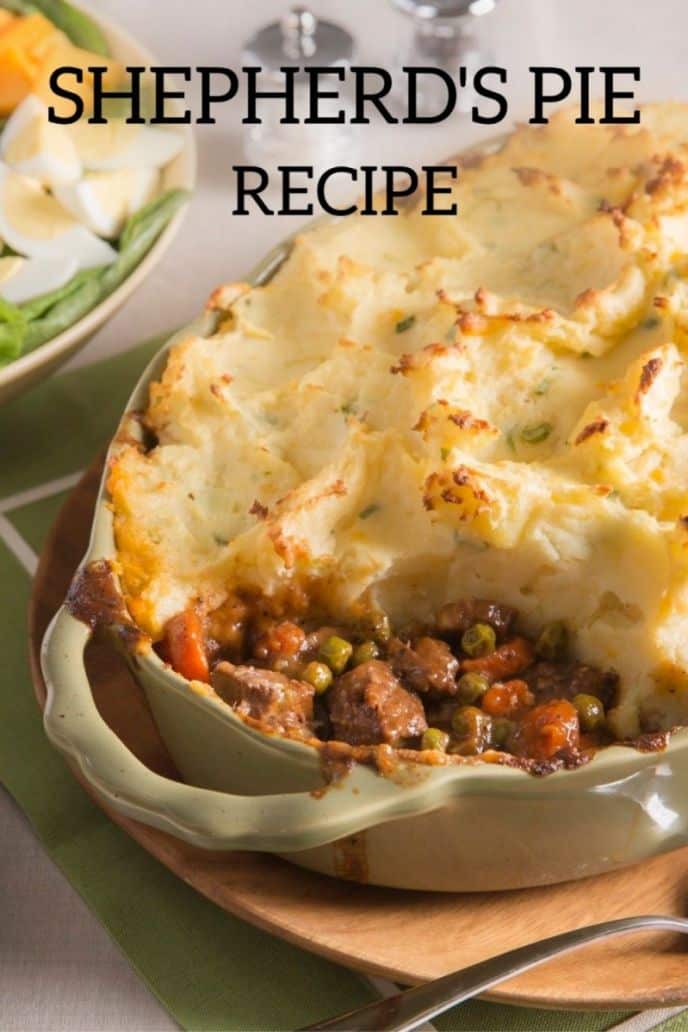 What Is Shepherd’s Pie?

With so many variations, these days, Shepherd’s pie takes on many forms.

However, a traditional recipe would consist of minced lamb or minced mutton, or beef that is cooked with gravy or sauce, onions, and even peas, carrots, and other vegetables.

Finally, it’s topped with a thick layer of mashed potatoes and then baked in the oven. Often times it will be topped with a layer of cheese to melt on top.

That’s the basics of the traditional recipe.

Is Cottage Pie the Same?

The short answer is yes. Cottage pie is the same thing as Shepherd’s pie. The word cottage used to refer to a home that workers who lived in rural settings would live in. More or less the poor people, who lived on the outskirts of town.

Personally, I prefer it with beef! 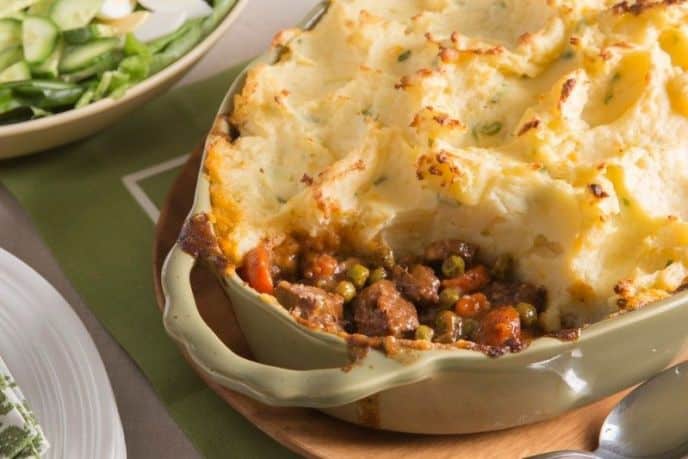 Where Did It Originate and Who Invented It?

This dinner meal originated in the United Kingdom and Ireland. This meal is well known across Ireland and each place you go will make it slightly different.

If you ever have the pleasure of visiting Ireland, go on a Shepherd’s pie tour (self-guided of course, unless that’s really a thing?)

Each pub makes its own recipe and has a distinct flavor only they can claim as their own.

Without getting too deep into the political aspect, Irelanders couldn’t afford much under British rule and had to make the most of what they had.

Shephard’s pie was invented by the lower-class as a way to enjoy leftovers.

As potatoes were an easy to grow crop, commoners would use it as the hearty part of their dish. Filling a dish with leftover scraps and topping it with potatoes became an amazing traditional Irish dish. 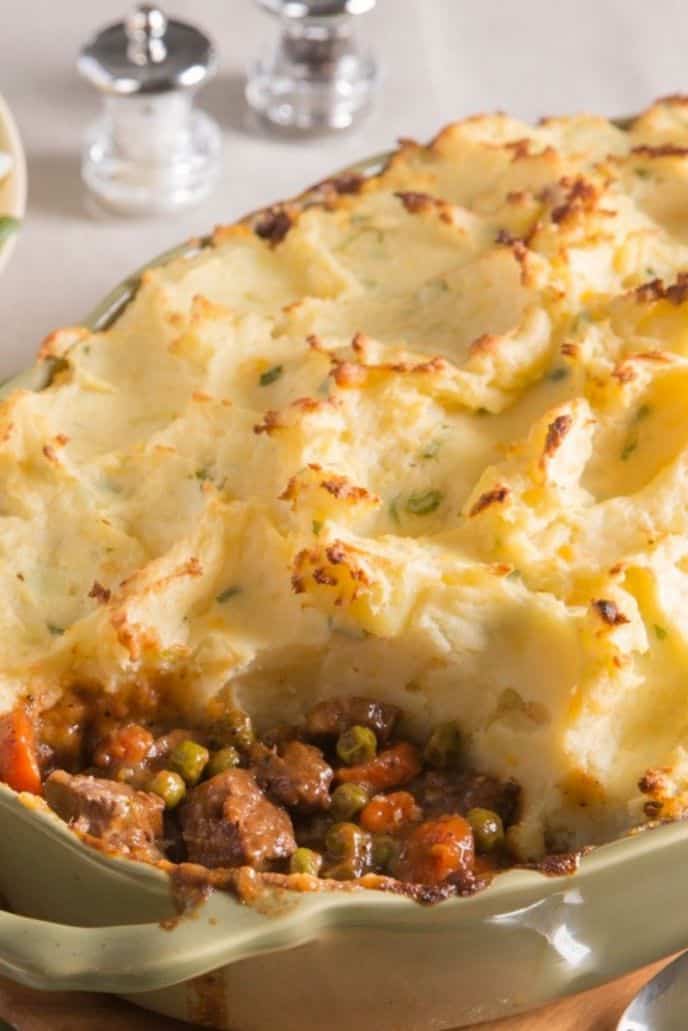 How To Make Shepherd’s Pie

Shepherd’s pie is relatively easy to make. You can find my entire recipe below.

When the mashed potatoes are almost cooked, you can sautee the beef and prepare the vegetables.

The meat and vegetables will go into a 3-quart dutch oven. The mashed potatoes will go on top. 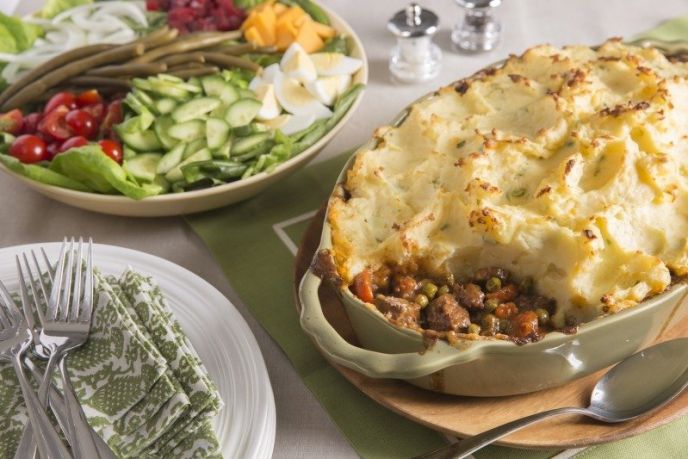 Can Shepherd’s Pie Be Reheated?

Yes, you can reheat Shepherd’s pie! You can use an oven or microwave to reheat this dish.

Oven: Remove from the refrigerator and place in an oven-safe dish. Wrap with aluminum foil tightly as to not allow any moisture to escape. Reheat at 350 degrees F. for about 30 minutes.

Microwave: Place Shepherd’s pie in a microwave-safe dish to reheat. Stir occasionally until it is heated through. Microwave reheating is the less desirable option due to uneven heating. 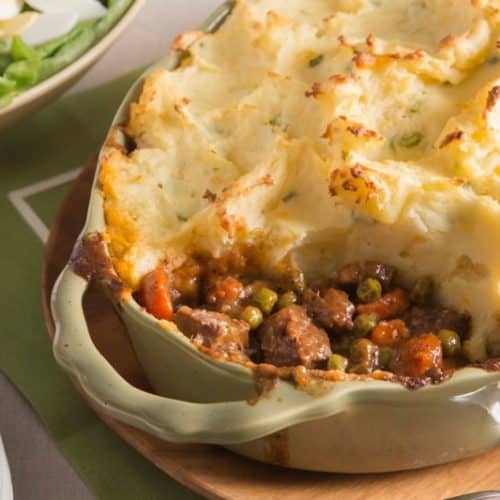 This Shepherd's Pie recipe is so delicious and easy to make. It will also make your house smell amazing! Find more recipes at ScrappyGeek.com