St. Patrick’s Day desserts should be on your menu this year. So, in the traditional Irish spirit, we’re making an easy beer cupcakes recipe.

These St. Paddy’s Day dessert cupcakes are festive and delicious.

Loaded with your favorite Irish stout beer and topped with Irish cream frosting, everyone is sure to love these treats!

So, you’re looking for an easy beer cupcake recipe for a St. Patrick’s Day dessert?

Well, these beer cupcakes are ideal for St. Patrick’s Day pastries. Because we’re using Guinness, which is an Irish stout beer.

Specifically, this beer gives the cupcakes a rich, strong flavor that blends well with the chocolate flavors.

An important thing to know, is that Guinness cupcakes are made using the dark Irish dry stout that originated in Dublin, Ireland, in 1759.

Also, it is an instant classic for St. Paddy’s day, Because the Irish stout goes perfectly well at the same time with chocolate. As a result, you get unquestionably the most decadent tasting cupcakes.

Since it’s topped with Irish cream frosting, these can’t be beat!

In fact, just toss a chocolate coin and a few sprinkles on top and everyone will love them.

Additionally, it is also widely available. Because it is brewed in nearly 50 countries. In fact, it’s available in more than 120 countries worldwide.

The flavors of chocolate and stout beer go so well together. So, we just had to make these easy St. Patrick’s Day desserts.

As a matter of fact, this is a recipe you’ll want to make every year to celebrate.

Because they’re quite easy to make and boast a rich, delectable flavor.

So, whether you’re Irish or not, you’re going to love these cupcakes!

On the positive side, it’ll only take about 40 minutes or so. And it will be great for your St. Patrick’s Day baking.

Is There Non-Alcoholic Beer Cupcakes?

Yes! If you want to make your St. Patrick’s Day desserts without alcohol, there are two simple swaps to make.

Particularly, this is noted in the recipe below. Simply swap out the beer with a dark brewed coffee. And change the liqueur with milk.

It’s totally easy, and acceptable to make this recipe without alcohol. Also, it’s probably best if you’re planning to bring them to work for St. Patrick’s day!

In any event, don’t forget to grab chocolate coins and green sprinkles to finish off your cupcakes!

What is St. Patrick’s Day and Why Do We Celebrate It?

St. Patrick’s Day is a worldwide celebration of Irish culture, Because it is in remembrance of patron Saint Patrick. Particularly, it’s a cultural and religious celebration held on March 17th.

Held on the anniversary of Saint Patrick’s death, the day commemorates the arrival of Christianity in Ireland during the fifth century.

With this in mind, St. Patrick’s Day is celebrated in countries with people of Irish descent.

However, it has morphed into much more these days. For one thing, it’s become a holiday for celebration, drinking, and full of delicious foods.

So, it’s celebrated in the United States by most people, regardless of religious beliefs.

In either case, wearing green clothing and feasting on Irish dishes, desserts, and alcohol are just a few of the ways people celebrate. 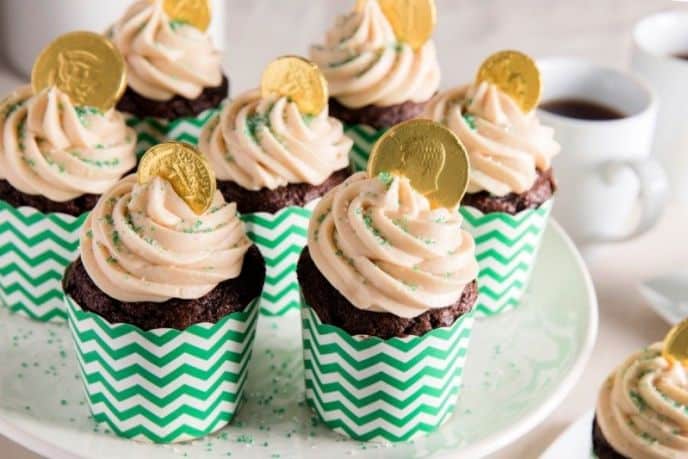